« The Rain, the Water Cycle, and God | Main | What the Cross Really Symbolizes »

The debate was suddenly ended by two Bell Labs researchers, working on something else entirely, who won the Nobel Prize for their accidental discovery.

"Big Bang" as a Put-Down

In the late 1940s, an astronomer named George Gamow took Abbé Georges Lemaître’s idea of an expanding universe and worked in some ideas from quantum theory. Gamow's equations suggested that the universe originated in a single point that “exploded.”

Good theories are supposed to generate testable predictions, so that people can go look and see whether the predictions turn out to be true. Gamow’s equations predicted a couple of things.

Hoyle claimed that there was no fossil record of the Big Bang of the kind Gamow had predicted.

But the expansion of the universe was pretty well documented by the red-shift data. What was Hoyle’s explanation? He and others offered an alternative theory: The universe was infinitely old, and matter is continuously being created to fill the universe as it expanded. This was known as the “steady-state theory.”

(I remember reading about the debate between the Big Bang proponents and the steady-state crowd when I was a youngster. I distinctly remember my impression that the smart, educated people were backing the steady-state theory, and that the Big-Bang folks were considered too predisposed to see God's handiwork everywhere.)

In 1965, two radio-astronomy researchers at Bell Labs, Arno Penzias and Robert Wilson, were using an ultra-sensitive receiver system to study radio signals from the Milky Way. They kept hearing a background noise, a “hiss,” so to speak, that they couldn’t get rid of. 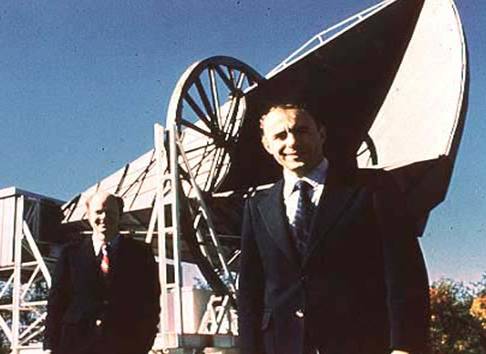 Penzias and Wilson calibrated and tuned their instruments. They pointed the antenna at different parts of the sky, and even at New York City, to see if the hiss was coming from somewhere specific. They even got up into the antenna and cleaned out all the pigeon droppings. Nothing worked -- the hiss was still there.

Finally, Penzias and Wilson called Robert H. Dicke, a physicist at Princeton University. Coincidentally, Dicke and his colleagues were making preparations to start looking for the Big Bang afterglow that Gamow had predicted. According to a Princeton Web page, One of Dicke's colleagues remembered that "Dicke hung up, turned to us, and said, 'Boys, we've been scooped.' " It was no wonder that Penzias and Wilson couldn't get rid of the hiss -- the hiss was the "afterglow" of the Big Bang predicted by Gamow.

(Many scientists currently think that the Big Bang wasn't an explosion, but instead was a virtually-instantaneous inflation of the universe from an infinitesimal point.)

Penzias's and Wilson's discovery caused major excitement in the scientific community. Later, other workers confirmed one of Gamow's other predictions, the one about the ratio of hydrogen to helium in the universe. The Big Bang theory had won -- the steady-state theory was eventually discarded (although Hoyle continued to defend it for some years).

In 1978, Penzias and Wilson received the Nobel Prize for their discovery. Under Nobel rules, Gamow could not share in the prize because he had died ten years before.

Interestingly, Penzias apparently is religious, according to this paper quoting many of his writings and stating that it was written with his assistance. I've read that Wilson is a strong Christian but haven't been able to track down where I read it.

The Bell Labs Web site has an interesting write-up of Penzias's and Wilson's discovery. See also the biography of Penzias at the same site.

The first chapter of Bill Bryson's A Short History of Nearly Everything, reprinted in the New York Times, provides an entertaining read.

Posted at 11:26 AM in Core Christianity, Faith for Skeptics, Religion, Science and Religion | Permalink