When recently challenged by a conservative Christian to describe my worldview, I responded that it was one of attempting to face the facts, which had led me to be a theist and to try to be a follower of Jesus, but which had also led me to reject many of the claims of orthodoxy.

Gratitude and Faith:
Just Who Should We Be Grateful To?

A Fox News article about Thanksgiving reminded me of a key milestone in my faith journey.  The article reports that Maryland public school students are taught that the Pilgrims held the first Thanksgiving feast out of gratitude -- but not that they were grateful to God.

A number of years ago my wife and I went for a walk in the neighborhood.  This was at a time when I was skeptical about the existence of God.  Back then I thought I was probably an agnostic:  I felt that there might well be some kind of deity out there, but I didn't think humanity would ever be able to know, one way or another.

Continue reading "Gratitude and Faith:
Just Who Should We Be Grateful To?" »

A few weeks before his death at age 84, Benjamin Franklin summarized his religious beliefs, in terms with which I could readily associate myself:

This morning I chose to remain silent during portions of the Nicene Creed at the Thanksgiving Eucharist.  This was an experiment in response to a long posting by my fellow blogger Pontificator, who was replying in turn to this earlier post of my own, concerning whether a skeptic can say the Nicene Creed in good conscience.

When you join in the corporate confession of the “We believe,” you are publicly identifying yourself with the beliefs of the Church. You are making them your own, implicitly praying to God that he will overcome all your disbelief and doubt. You are promising you will die with your brothers and sisters in Christ should they ever come under persecution for their beliefs. To say the Creed is to assent to the Creed. Nor can you hide in the first-person plural formulation, as if “we” did not include “I.”

He concludes with the question:

Dear brother, I applaud your honesty. But would it not be more honest to remain silent when the Church professes the creedal faith of the saints and marty[r]s?  [Emphasis added.]

So this morning I decided to remain silent during those portions of the Nicene Creed which I could not personally profess in good conscience.

Here's a real-world illustration of how stories about historical events can mutate in the retelling, and why:

"Schindler had almost nothing to do with the list," said David M. Crowe, a Holocaust historian and professor at Elon University in North Carolina, whose book, "Oskar Schindler: The Untold Account of His Life, Wartime Activities and the True Story Behind the List," was published this fall by Westview Press.

Posted at 11:46 AM in Authority, Faith for Skeptics, Scripture | Permalink | Comments (0)

I don't know whether these folks think of themselves as followers of Jesus, but if you ask me, their actions pass the What-Would-Jesus-Do test:

Nearly a year after a woman was electrocuted while walking her dogs on a wet East Village street, Consolidated Edison has agreed to pay her family more than $6.2 million and to set up a $1 million scholarship fund in her name at Columbia University, where she was a doctoral student.

"What are the data?"

From The Vicar of Christ, Walter F. Murphy's 1979 masterpiece about the first American Pope, Francesco I:

I remember the evening when two of your seminarians from the North American College were pompously discussing [at dinner] the great theological difference between the Greek Orthodox and Roma on the nature of the Holy Trinity.  As you know, the Greeks assert that the Holy Spirit proceeds directly from the Father, while we know that He proceeds from both the Father and the Son.

For ten minutes Francesco listened intently to the discussion, then asked his usual kind of question:  "What are the data?"

"I do not understand, Holiness."

"You have been talking about a factual problem, not one of logical relationships.  Either the Holy Spirit proceeds one way or he proceeds the other.  Either is perfectly justifiable in logic.  What are the data on which we can determine which is correct?"

That sort of hardheaded indifference to 2000 years of theological debate, but gentle tolerance for those whom it pleased to engage in such activities -- provided they kept themselves fully detached from the real world -- was typical of the Francesco who had been Declan Walsh. 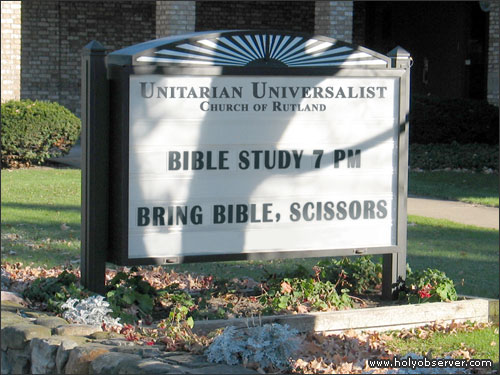 (Hat tip to The Corner.)

Why Say the Nicene Creed?

Episcopalians recite the Nicene Creed at every Holy Communion.  Some of my traditionalist friends, knowing I don't literally believe all the assertions of this creed, ask how I can still recite it in good conscience.  That's a good question, which I ponder every Sunday.

Here are a few possible reasons for reciting the Nicene Creed even when you can't intellectually assent to everything in it.  Let me acknowledge up front that few, if any, of these reasons are original to me.  As time permits, I'll try to update this posting with citations to reference sources.  Some of these reasons may strike the reader as mere rationalizations or excuses.  They may well be that.