I'm Back, From the Alaska Wilderness

I just got back yesterday from a ten-day backpacking trip in the Alaska wilderness above the Arctic Circle.  I was part of a crew that also included four 14-year-old Scouts from my son's troop, in which I'm one of the adult leaders; my son, who just turned 18; and a 22-year-old Eagle Scout guide provided by the local Boy Scout council.   There were three other similarly-constituted crews from our troop, for a total of 24 people, all hiking different parts of the Gates of the Arctic National Park.

We flew from Houston to Fairbanks, arriving at about 8 pm local time.  The local Scout executive picked us up and took us to the Scout center, where we met our guides, picked up our crew gear, packed our food into bear cannisters, and otherwise got ready to go out.

The next morning we flew in groups by Cessna to Bettles, which is basically an airstrip just north of the Arctic Circle with a lodge, a couple of mom-and-pop restaurants, and a ranger station.  In Bettles, we pitched our tents in one of the aircraft hangars, because we were told we wouldn't be getting out that day due to weather.  The guys played cards and Scrabble.

The local park ranger gave us a briefing on bear safety and Leave No Trace principles. 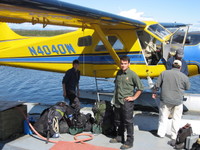 From Bettles, each crew was flown by float plane to a lake, where we were dropped off to backpack to our respective take-out lakes.   My crew and another one had to wait in Bettles for two full days because of weather.  We were finally put in at Loon Lake, about 80 miles northwest of Bettles (to see it on the linked map, use the 1:500000 scale).

Over the next seven days, we hiked to our take-out point at Agiak Lake (in the upper left corner of the map).  On several of the days we stayed where we were and did day-hikes, went fishing, etc.  The group probably would have moved a lot faster but for me; I had thought I was in pretty good shape, but the first couple of days were rugged.  I quickly realized I'm not 20 years old any more.  I was pleased to see that as the week progressed, my legs got stronger and stronger, and I was much better able to keep up.

We didn't see another soul during the entire time we were on the "trail."  I put that in quotes because there was no trail, apart from the occasional game trail.  We hiked in knee-high bush; in head-high brush; across lichen-encrusted rocks; in marsh; and on tussocks, which is like walking on a thick, soggy, lumpy mattress.

We carried roughly 10 days of food, which is pretty darned heavy.  This was because the previous Scout group had run into bad weather at their take-out point; the float plane couldn't land to pick them up until two days after their scheduled time.  By that time, they were down to eating left-over Cream of Wheat.   Consequently, we packed extra food, and my pack weighed 55 pounds at the start of the trip.

We saw lots of beautiful scenery and clear blue skies.  See the picture at left, one of several hundred I took with a Canon PowerShot SD700 Digital Elph with a 2 GB SD memory card; I was pleased that one battery lasted for the entire trip.  That's me on the right, with a ten-day growth of beard, several layers of clothing, and pockets stuffed with gear, standing next to my son.  We were on a ridge we climbed on one of our day hikes; that's Agiak Lake in the background.  (Click on the image for a larger photo.)

The big excitement was seeing a grizzly bear and her two cubs.  This was on the second day.  We spotted the bears about 75 to 100 yards ahead of us.  We were headed roughly north in a valley; they were coming south.  The adult stood on her hind legs to check us out, followed immediately by the cubs.  It made for a somewhat comical effect, even though we all knew that grizzly bears are a deadly serious matter.  Fortunately, the bears got spooked and ran for the mountainside on the west side of the valley.  Let me tell you, those bears were fast, including when climbing up the mountainside.  Simultaneously, we headed for high ground on the opposite side.  We stopped to eat lunch and watched until our ursine friends moved out of sight.  As it turned out, we were the only crew of the four to see bears, or any other non-bird wildlife; we also saw a moose and her two calves.

I used my Blackberry's memo-pad function to do a good bit of writing, some of which will eventually end up being posted here.  (No, I wasn't in cell range, so I got no emails nor calls.)  By powering off when I wasn't using the BB, I managed to stretch out the battery life for the entire time in the back country.

It was a wonderful trip.

Welcome home! It sounds wonderful; you've made me want to go up there sometime, too.

(BTW, D.C.: Checking the "Remember personal info" button when filling out the "Post a Comment" info doesn't work. I have to enter it all every time I comment.)

Very cool! What am amazing experience and memory for you and your boys.