« Evidence trumps hunches in medicine - and in theology | Main | The apostolic succession belongs to all the baptized, not just to bishops »

"What was that? Did you say something?" 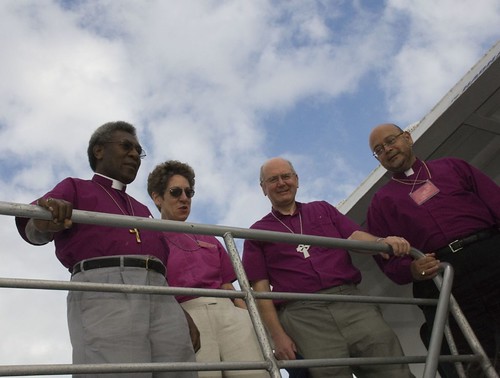 The title of this post should be the reaction of the Episcopal Church to the Communiqué issued by the Primates today, demanding that we make a host of changes to 'accommodate' (read: cave in to) our insurrectionist wing and its 'Global South' supporters, including accepting what amounts to oversight from the Primates.

The hardworking elves at TitusOneNine have this roundup of reactions.

Father Jake says:  "Once again, the Primates fail to recognize that the House of Bishops does not have the authority to respond by themselves. There's a number of points that we cannot possibly agree to. [...] I await an explanation from our Presiding Bishop."

UPDATE: Father Gawain says:  "The communique will make no one happy. It does continue to misunderstand the democratic and transparent priorities of the Episcopal church. It assumes that bishops have power to command the laity. [...] This presumption of authority is the kind of activity that made the American colonists angry in the first place. [...] One thing that Americans did not like in the 18th century, was bishops. Sometimes I think bishops are the problem. And I like bishops."

With so much real work to do, I don't know why TEC should spend one more nickel, or one more minute of time, trying to placate these men.